Welp, it’s Election time again, and the Democratic Gubernatorial challenger here in South Ca’lina has had the GALL to object to the Confederate battle flag flying outside the State House, right across from Main Street.

South Carolina Governor Nikki Haley (R) on Tuesday said that there was no need to remove the Confederate battle flag from the Statehouse grounds because it was not an issue for CEOs, and the state had “fixed” racist perceptions by electing an Indian-American governor.

Oh, hey, what’s that about CEOs?

“What I can tell you is over the last three and a half years, I spent a lot of my days on the phones with CEOs and recruiting jobs to this state,” the governor noted. “I can honestly say I have not had one conversation with a single CEO about the Confederate flag.”

After all, it’s not like we haven’t made giant strides in rehabilitating our image nationwide:

Haley said that she had tried to improve the perception of the state by ordering employees to answer the phone with the phrase “it’s a great day in South Carolina.”

“But we really kind of fixed all that when you elected the first Indian-American female governor,” she insisted. “When we appointed the first African-American U.S. senator, that sent a huge message.”

Some of our best friends are… nnn…iii… those people! And I’ve almost gotten to the point I can call our government offices and not have to repress giggling at how the phones are answered.

I mean, just because South Carolina’s elected officials and GOP representatives keep popping off with outrageous racist bull, you’d think we had some sort of problem down here. Nothing could be more wrong!

For example, at least we’re not calling for martial law.

Okay, I’ve had enough of South Carolina. I’m ready to go back to New York now. 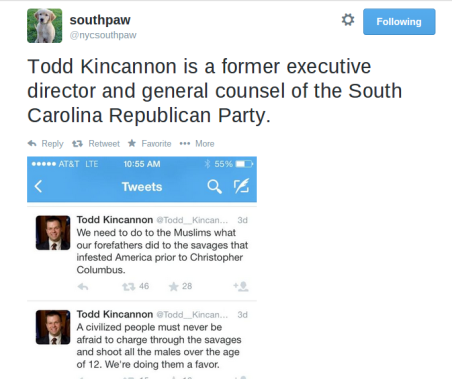 Hey, Todd, I have a book for you to read…

There’s just no other way with Ebola. We need to be napalming villages from the air right now.